William Emerson “Billy” Griffith of Egmont, British Columbia was born on December 11, 1934 and passed peacefully on May 27, 2021, aged 86, from unsuspected heart disease. He was still fishing commercially aboard his boat Tzoonie River just two days before.

A memorial gathering will be held in Egmont, BC when gatherings are permitted again.

We will post more stories and pictures here soon. Feel free to share yours too, please, or mention some favourite songs. 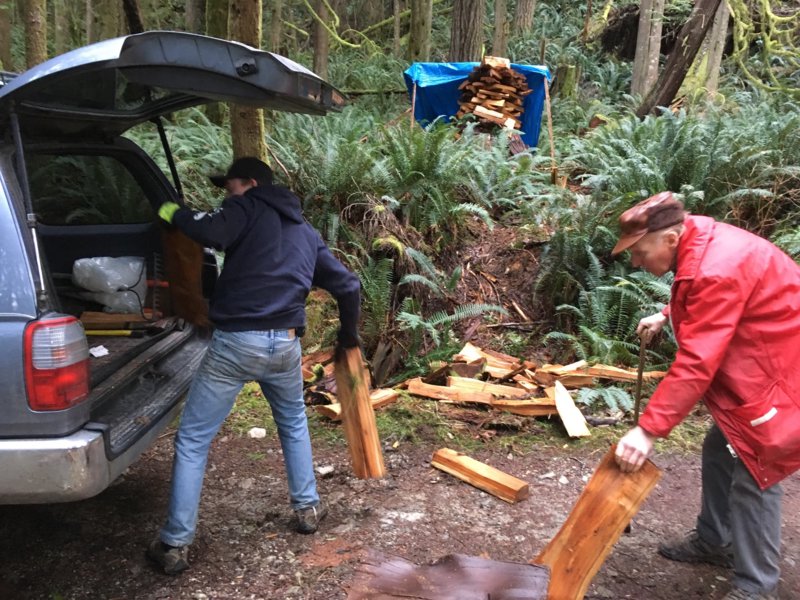 Billy and grandson Michael getting in firewood, Egmont, February 2021 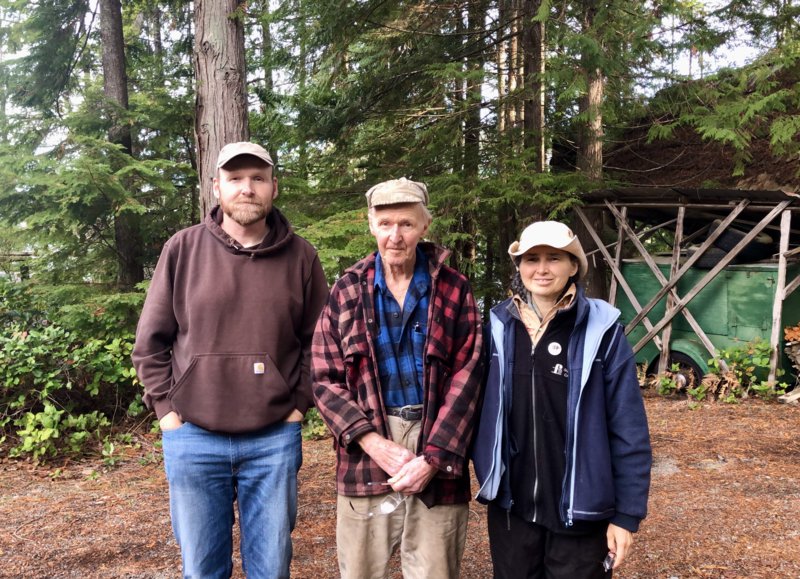 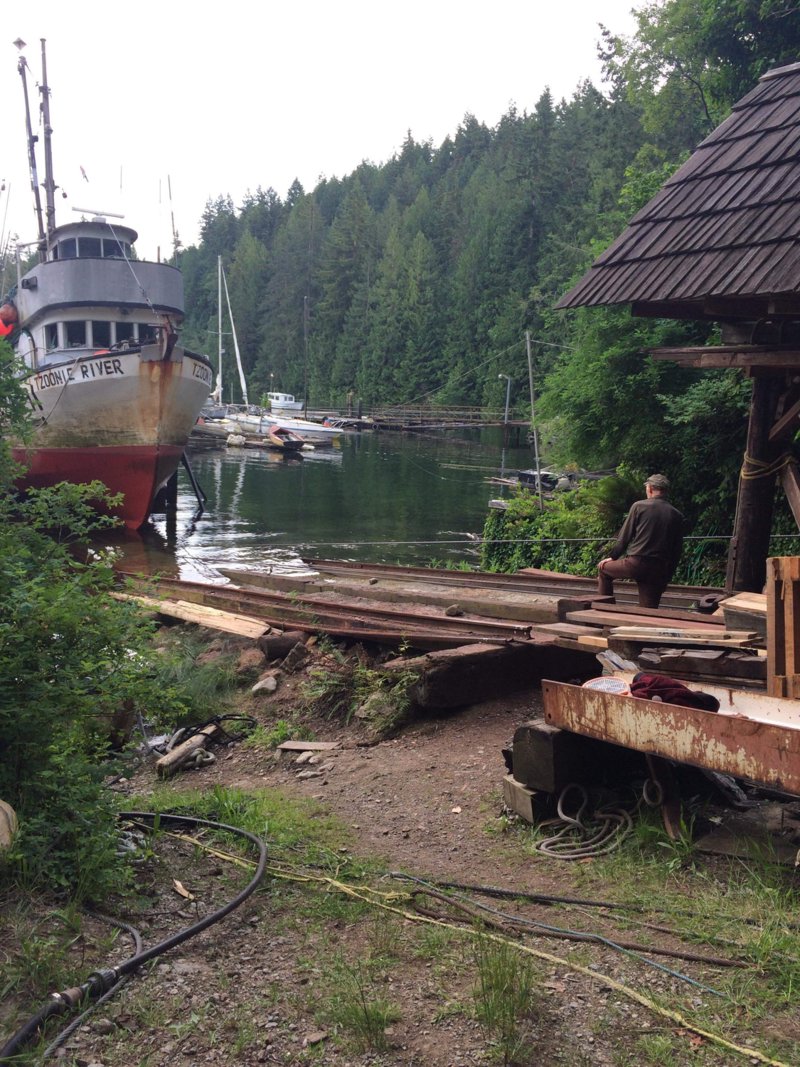 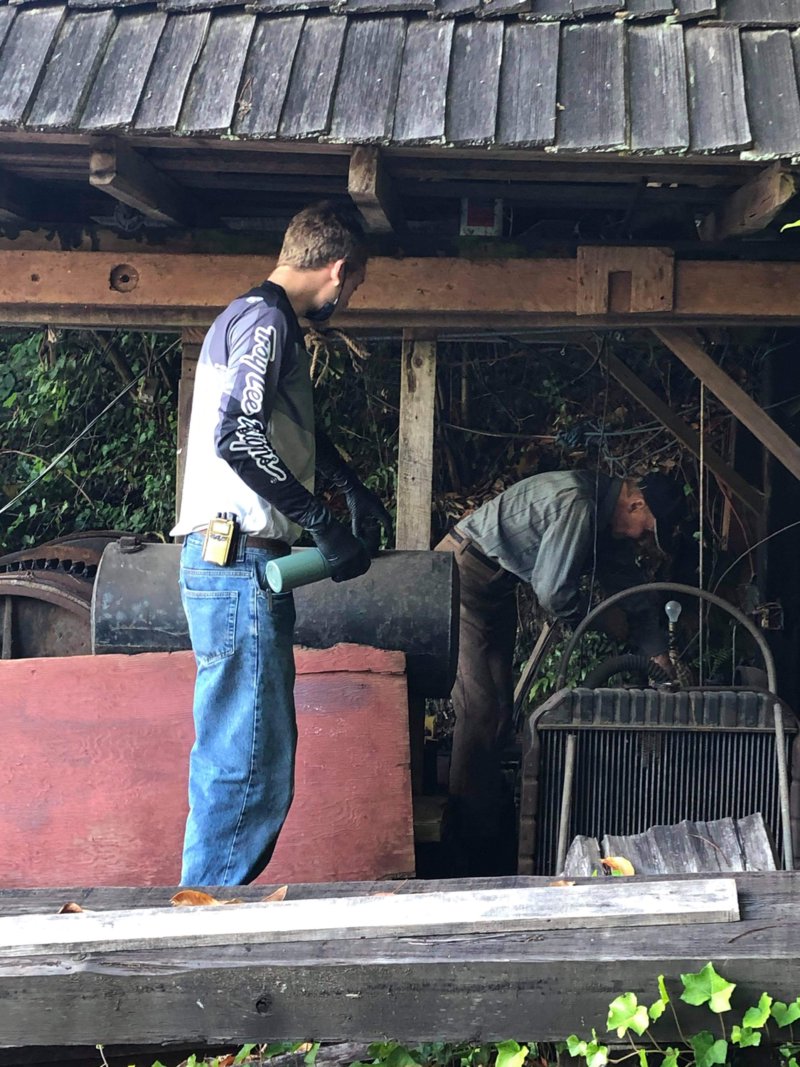 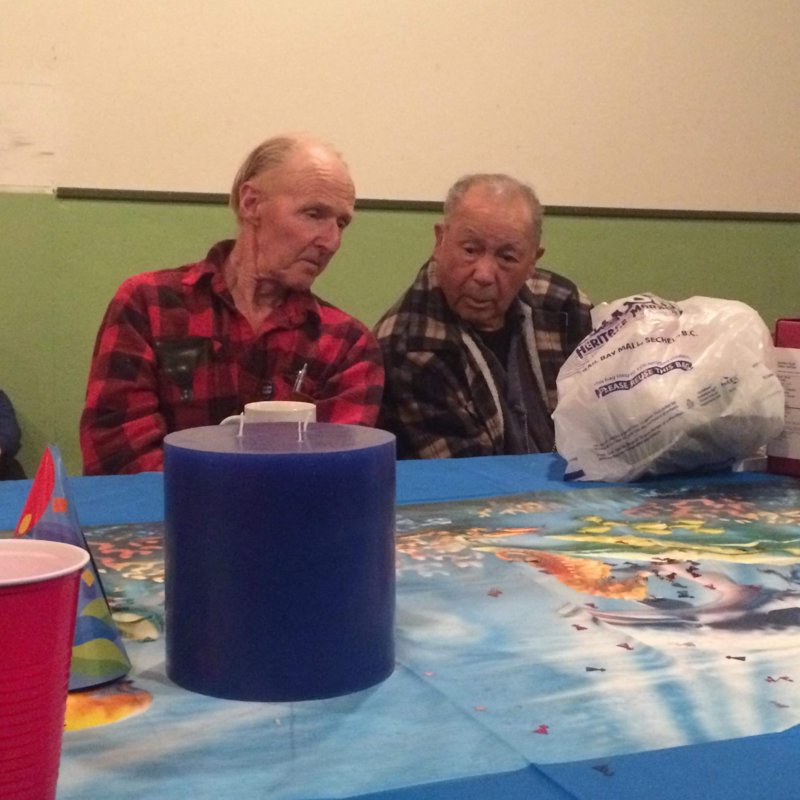 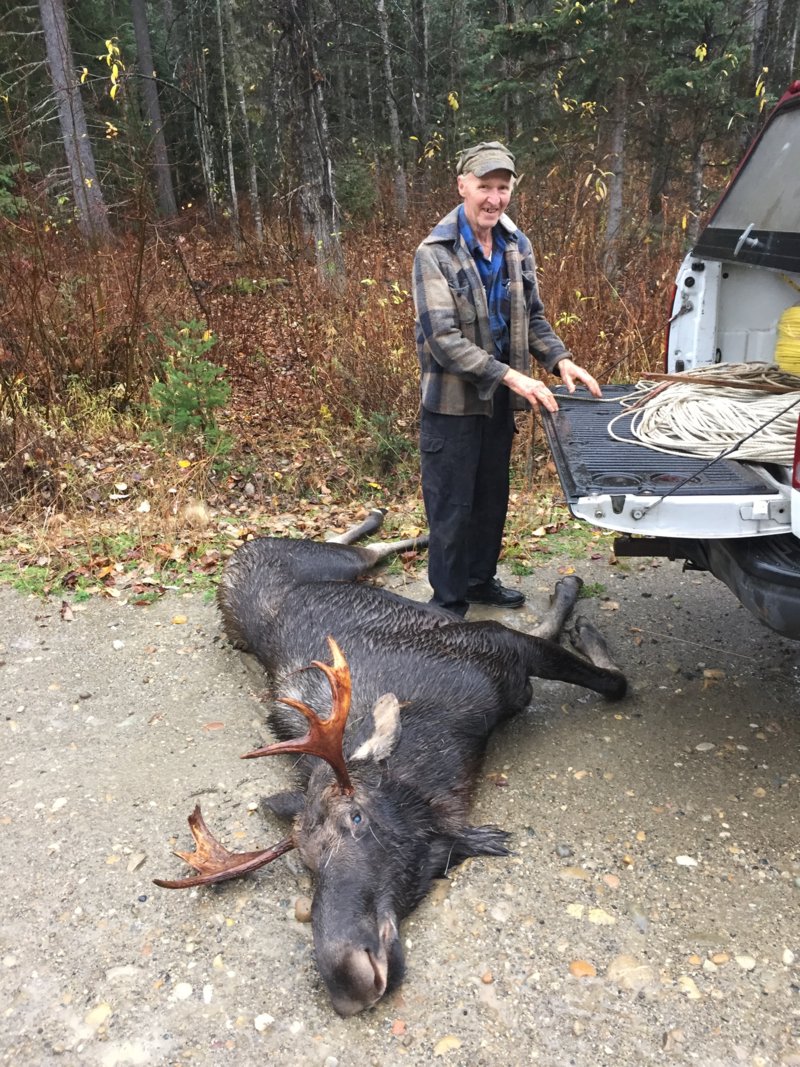 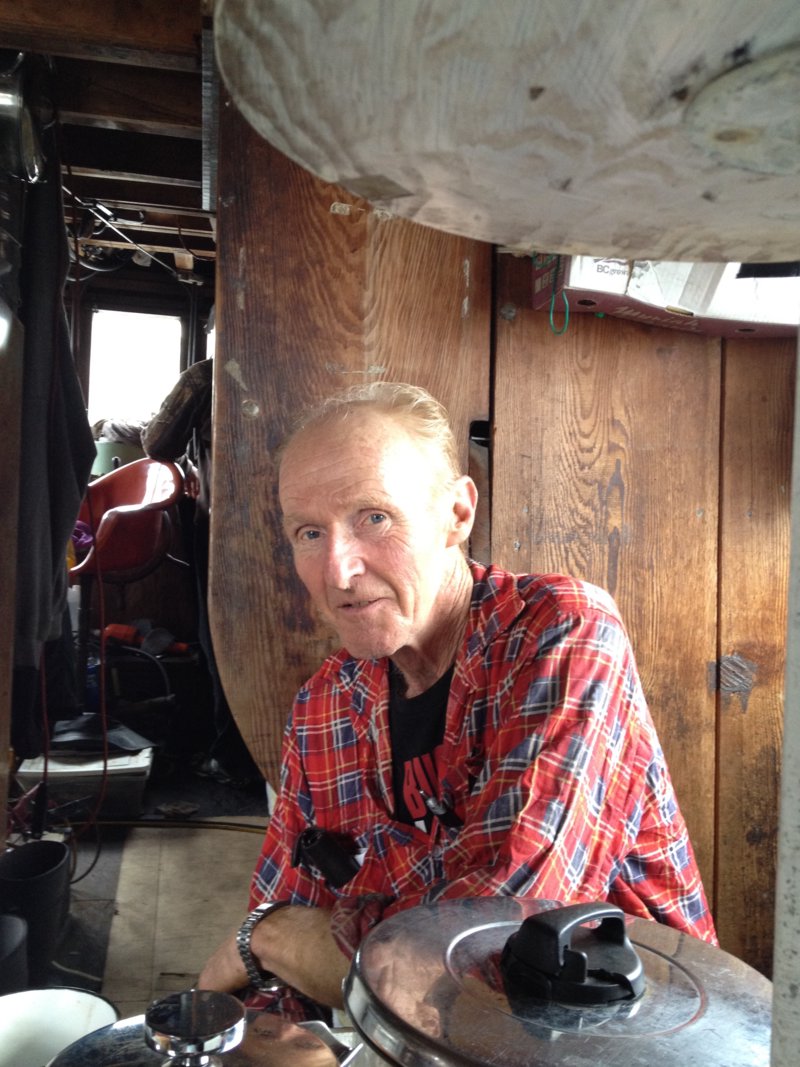 The passing of Billy Griffith is a huge loss to the community of Egmont. He was in many ways the respected Elder, the court of higher moral authority. I don’t mean that he was a moralist, far from it. He just had that authority that goes with a lifetime of work and a name for taking care of his crew. I know. My own son Michael fished with Billy at age 17 and I never had any fears of safety lapses on his boat Tzoonie River.

I saw Billy’s authority in action on that drum seiner. The crew would often sit around and jaw bone on regular occasions and everyone said their peace. Billy always spoke last. He usually remained quiet and took it all in, then when everyone had had their say, he would speak. After he spoke there really wasn’t more to say. That was it.

He had the same authority in the community especially in his later years. I remember many occasions when parties aggrieved by local politics would take their case to Billy. That was it, right to the top. ‘I’m going to see Billy Griffith’ they would say.

Speaking of the top, not too many years ago Billy climbed Redtop or Mount Drew on the map. It’s a hell of a climb. I don’t know if he’d been up before but he did it around age 65, in loafers. Loafers.

About 10 years ago I was walking on fallen logs with Billy. Even though I had worked in the bush a long time ago, this time it looked a long way down to the ground . I am 10 years younger. Billy? Leaping from log to log, dressed in, you guessed it, loafers. I had trouble keeping up.

He was an amazing man from an amazing family and his death is a terrible loss to all of us.

So sorry to hear of your loss! Two wonderful children and an amazing grandchild. What a legacy your parents left behind!
Sending Love to you all!

The Cornpones used to perform at Egmont Day, and Billy always requested “The Road to the Isles”.
I started working on recording myself, but it sounds horrible. Here it is a youtube. https://www.youtube.com/watch?v=CV5mh4SbjWs. Crank it up and send those vibes up.

Billy will always be remembered to me as a kind, quiet man with a fun sense of humour. He will be missed as I always looked forward to seeing him and saying hello. Rest Well.

Billy was one of a kind. He gave so much to and for everyone.
He will be sorely missed and very loved!

Hi, we’ve put a little tribute to Billy up on our website. It’s a bit long to post here so here’s the link: http://www.penderharbourheritage.ca/billy-griffith.html

Billy was the big brother I never had, working with him on setting up the Heritage Centre then being asked to run it was the highlight of my career.
I will miss him sorely.
Fair winds and following seas Billy.

Billy was a true icon in the BC Fishing industry and held the respect of a broad and diverse network. He was a man of unparalleled honesty, integrity and general goodwill for all things and folks worthy of support.

Billy first joined Mutual Marine in 1975 and his membership continued for 46 years. Billy was a steadfast supporter of the Mutual and embodied the foundation this organization was built on. For that we, and the Mutual Membership, are deeply indebted.

Billy will be long remembered and sorely missed.

With warmest regards,
The Board of Directors and Staff,
Pacific Coast Fishermen’s Mutual Marine
Insurance Company

Bill was a good friend - a knowledgeable, kind, honest and hardworking man who’s legacy will live on in all of us who were lucky enough to know him.
I was asked the other day to describe Bill — and I said if the world was filled with ‘Billy G’s’ you’d never lock your door — or fear for your daughters.
Bill will certainly be missed, never forgotten - Maureen, Michael & Johnny stay strong and take care.
Warmest regards, Lewis & Amber Bublé & all our family

Billy and I would drive together down to Gibsons when we both sat on the board of the Sunshine Coast Museum and Archives, and I loved hearing his stories of life on the water, the years with Iris trying to protect the environment of the coast, his efforts on behalf of the fishing co-ops and his occasional battles with government stuffed shirts. He was a kind man of great integrity and I am so grateful for the chance to have shared a little of his company on this earth. Maureen, you had a father who was proud of you and your brother.

Seeing an Osprey (fish hawk) here in Egmont always reminds us of Mom (Iris Griffith) since an osprey called and circled after we spread Mom’s ashes in 2002.

My husband Paul watches birds a lot. He had not seen an osprey before that here in the years he’d been here, but one has visited each year since, around our house and Dad’s.

Through May this year we saw an osprey sometimes. But since Dad’s passing, we noticed them soaring or banking in the air right in front of our house. Now there are two of them.

One perched high in a dead tree across Maple Road, away from the water, and “talked” with Paul who was berry picking below, a week after Dad passed. (The call seemed slightly different from the usual “chewk” call.)

Two Ospreys are soaring and calling while I write this.

Billy, my older gentler cousin. You were one of a kind. You will be sorely missed by your family and the community you so tirelessly helped for so many years. The Sunshine Coast will not be the same without you.

I am grateful to have known “Uncle Billy” as my siblings and myself called him all my life, our families spent much time together over the many years. He and Auntie Iris were very special people. We went on many adventures , my Mom and all of my siblings and myself and made special memories with her and Maureen, Elaine and John, we would go and explore when our Dads were away fishing on the seine boats. We have shared so much and I will forever treasure every moment. We are better people to have known you, if we just take away one little piece of wisdom or kindness we are blessed. You are what legends are made of and I am beyond sad to say goodbye. I will cherish every memory.

Billy and I served on the Pender Harbour Health Centre Board of Directors for 9 years together. He used to pick me up on his way to meetings (and sometimes Iris stayed with my children if my husband was in North Vancouver working). We talked about everything – poetry, fish, weather, politics, our families (he loved his! I love mine!), the issues we were facing as directors of our health centre. I admired him so much. He was careful in his use of language, persistent, attentive, and a truly lovely human being. We’re better for having known him.

Thanks for everything Billy - your kindness and soft-spoken wisdom will truly be missed in the community. See you up on Red Top someday.

If you have never heard of an “ant lion” … well now you have and you can thank Billy Griffith. Have fun finding out (or remembering) this incredible creature that mostly goes unnoticed on the planet. This is just one of the great treasures Billy gave to me during my too-short connection to him. Miss you sir.

What a gift, to have had such a Dad.
What a gift, to have learned and go on learning from you and your example.
In my time, I hope I can have such a gentle and peaceful passing. Meanwhile I will go on treasuring a lifetime of moments.
Thank you, Dad.

Use the form below to add a message if you like. To share a photo or video, or to send a private message to the family, please email rememberingbilly@egmonster.com.

All messages will be reviewed before posting.